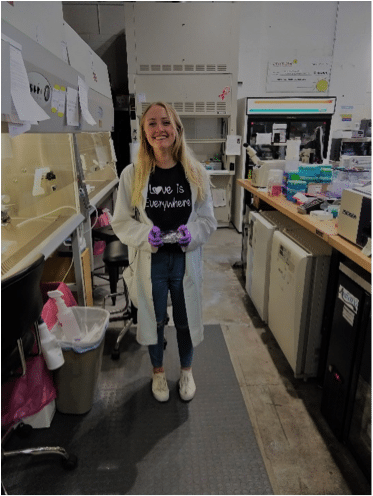 Each week we will be featuring the work of a scientist on the cc-TDI team to give you a view into the lab and an update on our progress. While some might argue that the Science Fiction genre is the most imaginative view of the scientific universe, we would argue that some of the actual science happening in our lab might be even more innovative and imaginative…. Hence, we have decided to call this new bog series: Science Nonfiction. If you’re a Science Fiction fan (or even if you’re not), sit back and get ready to learn.

Take it away, Cora…

Embryonal rhabdomyosarcoma (ERMS) has a raft of genetic mutations that make finding targeted therapies a major challenge. My work focuses on defining the subtypes of ERMS using RNA and DNA sequencing of large number of samples from several species including human, mouse, and dog. Our goal is to match each endotype to a drug, so we can look for treatments in a more “personalized” way.

Currently, we have a dendrogram with endotypes, but we are still hoping to add many more samples to get the full scope of ERMS. We have some cell lines and dog tumor samples that are in the process of being sequenced. I also have two cell lines, CHLA-33 (Fig 1.) and CHLA-37, that I’m currently growing in media. Once I have a sufficient number of cells, both of these cell lines will be sent for sequencing. We are also continually looking to adding more genes to look out for as they emerge from published papers, lectures, collaborators, etc. 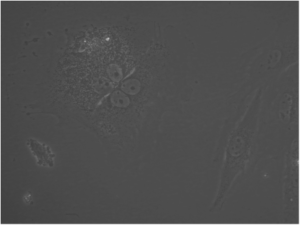 The next part of my project is validating our dendrogram with drug screens and immunocytochemistry. I have been doing drug screens on the cell lines as well as optimizing our protocol for staining cells with markers for cell proliferation, apoptosis, and differentiation. I have been testing out different blocking buffers, concentrations of antibodies, and dyes. The image below (Fig. 2) is C2C12 (a normal mouse muscle cell line) stained with Ki-67 (green), a marker for cell proliferation, and Hoechst 33342 (blue) as our nuclear counterstain. Our hope is that the cell lines within the same groups of our dendrogram will react to a variety of treatments in the same way. 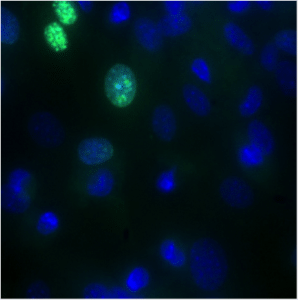 A huge thank you to those that helped to get the CellInsight up and running- this is very exciting for all of us at cc-TDI! The picture I’ve included bellow (Fig 3.) is the software that we’re using to image the cells. The image in the center is C2C12 cells stained with MF20 (green) as a marker for differentiation and Hoechst 33342. The CellInsight will help for understanding what is happening to the cells at the intracellular level once treated with drugs. I’m also excited to be constantly learning and being challenged with new problems. In the past few months I’ve learned about Perl, western blots, and even how to be a mentor. 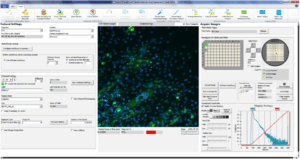 Fig 3. A closer look at the software that I’m using for the CellInsight with differentiated C2C12 (cells that have begun to fuse into myotubes) that are stained with MF20, a marker for differentiation.

One of my biggest inspirations for working at cc-TDI are the children that have been touched by RMS, including my cousin, Kiley. Kiley was diagnosed with alveolar rhabomyosarcoma (ARMS) at the age of 5 and her bravery inspires me to work as hard as possible to find safe and effective treatments for all children with cancer. Yet another inspiration of mine has been Calliegh Germer and one of her friends from school, Holly, who passed away from RMS. The shirt I’m wearing in the picture was a gift from Calleigh herself. The quote “Love Is Everywhere” was a quote that Holly would say. 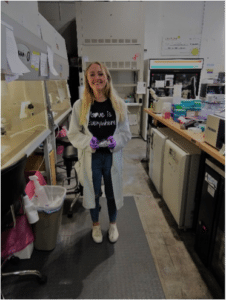 Fig 4. In lab with the shirt given to me by Calleigh

I’d first like to thank Calliegh Germer for not only inspiring me, but also many others. Calleigh and I spoke at the Sunnsyside Masonic Lodge about cc-TDI’s mission about why this mission is so important to us. Thank you for having us Sunnyside Masonic Lodge group! I’d also like to Dr. Patrick Reynolds for sending us cell lines that we hope to add to our dendrogram, and Dr. Bernard Seguin for sending us the dog tumor samples. Finally, a huge thank you to my team at cc-TDI for providing endless support!