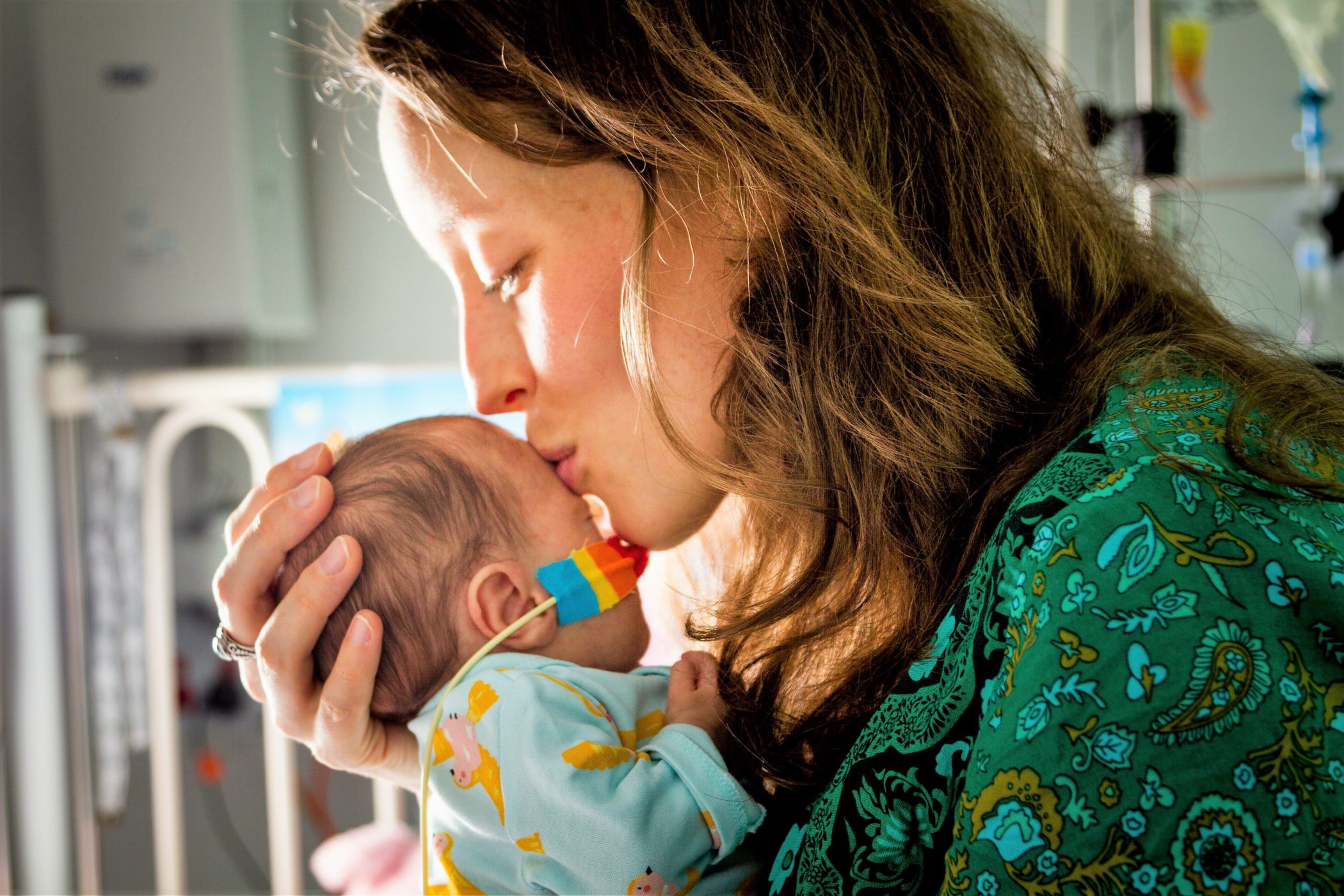 This is the story of our beautiful, firstborn daughter Zoe.

The first 6 months of my pregnancy were completely uneventful. Yes, I had odd cravings, started to avoid foods I’d loved, got cranky, and felt like a bipedal whale. Thankfully though, all the ultrasounds and tests were coming back normal, and I was so excited to be a mother.

It wasn’t until 28 weeks into my pregnancy that something didn’t feel quite right. I noticed that Zoe wasn’t moving and kicking as much as she usually did. We immediately saw our doctor, and after several tests and scans, Zoe was given a preliminary diagnosis of a sacrococcygeal teratoma – a rare but usually benign tumor on the tailbone. We were reassured that surgery could remove the tumor, and that our baby would be home after 6 weeks of recovery. To give her the best chance possible, we immediately relocated to Sydney so we could be close to the specialist surgical team.

As the weeks progressed, the tumor continued to grow rapidly, starting at 9 cm wide when it was first identified and expanding by roughly 1 cm each week. Two weeks before she was born, one of our radiologists questioned her initial diagnosis, thinking that the tumor looked to be coming from her leg rather than her tailbone. At 36 weeks and 6 days into my pregnancy, my water broke early. It seemed that the fast-growing tumor had begun to put a strain on Zoe’s heart, so an emergency c-section was required to get her out safely.

Our beautiful Zoe, came into this world on the 23rd of October 2020. Immediately we could see that the tumor was on her right leg and not her tailbone. In fact, the tumor encompassed her entire thigh and was about 40% of her total body weight. She had to be taken into intensive care for supportive therapy and needed four blood transfusions just to keep her stable through the night. By 4 am the next morning, the surgeons came to our room and broke the news – they would need to amputate her leg at the hip right away, or she wouldn’t survive another day. Even with the surgery, we were told that the chances of her making it through were slim.

Right before she went into the operating room, we said what we thought would be our final goodbye. Nine hours later, to our amazement as well as her doctors, she survived the surgery. We were so proud of her for being such a little fighter. Despite losing an entire leg, and instantly slimming down from 3.12 kg (6.8 lb) to 1.8 kg (3.9 lb), she was doing well. Over the next few days we didn’t leave her side. We read her books, gave her cuddles, and learned how to look after a newborn missing a leg, all within the confines of the children’s ICU.

For about a week, life seemed perfect. Zoe was recovering and the tumor was gone; or so we thought. A few days into her recovery, as I was changing her clothes, I noticed a few small bumps on her back. My heart sank as I was immediately faced with the realization that this was potentially a metastatic tumor. A couple of tests/days later, it was confirmed that she had stage IV rhabdomyosarcoma (RMS), and that it had metastasized to her skin and chest. She wasn’t even 2 weeks old when we got the news. Even so, we tried to stay positive and be grateful that at least her brain scans were clear of cancer, which was our biggest worry.

Not only did Zoe need to start chemotherapy immediately, she needed to do this while only weighing 1.8 kg (3.9 lb), recovering from a full leg amputation, and as a newborn not yet 2 weeks out of the womb. We needed to walk a fine line between treating the cancer and avoiding drug toxicity that could have left her with long-term damage. Moreover, because there are no targeted drugs available for RMS in children, the only options we had were standard generic chemotherapy drugs, the same ones used in adults. All we could do was fight on and hope for the best.

For the next couple of months, we looked after Zoe while she received her first round of chemotherapy. She tolerated some drugs well, others not so well. Due to COVID, my husband and I couldn’t be in her hospital room at the same time. So, we became shift workers, tag-teaming and rotating in and out of the ward every 12 hours. It was all the stress of looking after a newborn, with the added difficulty of having to do it alone and with a cancer diagnosis hanging over our heads like an ever-present dark cloud. Thankfully, over the course of her chemotherapy we noticed that the bumps on her back were slowly shrinking away. Everyone thought this was a great sign, including the doctors, and all of us had started to become cautiously optimistic. After all, she’d fought through a leg amputation at 12 hours old, she could fight through cancer.

After she finished her first cycle of chemotherapy, just before Christmas, we were told we’d have a few weeks out of hospital so that Zoe could recover in time for the next round. Before we left, the doctors booked her for an MRI scan. This was intended to be just a perfunctory check to make sure that the cancer truly was on its way out. We went in with all the hope in the world that it would be gone. However, the results were devastating. Somehow, even though she was cancer-free from the neck down, and all the tumors in her skin and chest had disappeared, the cancer had taken root in her brain and had spread extensively. By this stage, there was nothing that could be done and no treatment that could work.

We spent her last two and a half weeks at a children’s palliative care hospital, trying our best to enjoy the time we had left with our daughter. It was, and still is, heartbreaking. RMS is such an aggressive and ruthless cancer. RMS in children often has a dark path – treatment may work initially, but then the cancer keeps coming back time and time again, spreading like a deadly weed. If there had been a treatment that could have stopped the spread of her RMS, Zoe might be here with us today.