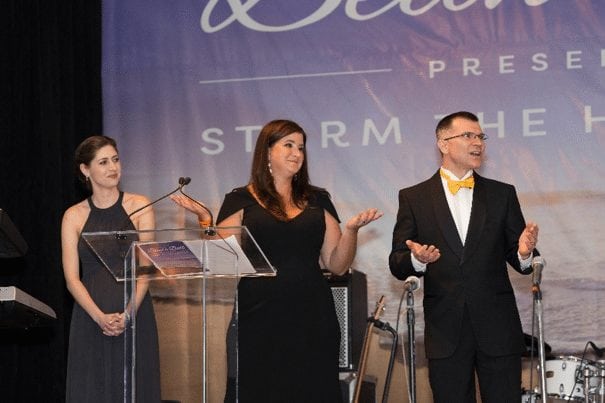 Philomena “Bean” Stendardo was a child with a very special gift – endless amounts of pure, unfiltered joy and self-confidence to think that anything is possible. At the age of 7, Bean was diagnosed with DIPG, which she fought courageously for ten months. Even after gaining her angel wings, Bean continues to leave a lasting impact on this world: her foundation, Storm the Heavens, is focused on bringing DIPG advancements to the forefront of cancer research.

Diffuse Intrinsic Pontine Glioma (DIPG) is a rare cancer of the brainstem – one that affects approximately 350 children per year.

Because of its location in the midbrain, DIPG is surgically inoperable, while radiation has shown to extend life by a few months at best. DIPG continues to be a difficult cancer to understand and even more difficult to treat – the average survival rate being just nine months after diagnosis.

However, thanks to collaboration between Storm the Heavens and cc-TDI, new approaches to DIPG may be on the horizon. cc-TDI has a history of discovering and developing new potential treatments for DIPG, and the latest research project in the pipeline looks to continue that trend. Storm the Heavens recently held the first annual Bean’s Ball in Philadelphia, PA to raise funds to support a DIPG clinical trial. The event was emceed by Flavia Colgan and was attended by several of Pennsylvania’s prominent citizens including Governor Tom Wolf, Pennsylvania Rep John Taylor and Philadelphia Councilman Mark Squilla. cc-TDI Scientific Director, Dr. Charles Keller, and Postdoctoral Neuroscientist Dr. Alexandria Harrold spoke at the event about this new partnership with a singular goal in mind: create new options for children diagnosed with DIPG.

“Although I never had the opportunity to meet Philomena, I can tell that she was a force and that the community behind her continues that legacy. I’m thrilled to be partnered with Mina, Mark and everyone behind Storm the Heavens.” – Dr. Alexandria Harrold

Dr. Harrold commented, “It was incredible to meet so many of the people in the Storm the Heavens community at Bean’s Ball, as well as present a snapshot of the DIPG research we’re undertaking at cc-TDI. Although I never had the opportunity to meet Philomena, I can tell that she was a force and that the community behind her continues that legacy. I’m thrilled to be partnered with Mina, Mark and everyone behind Storm the Heavens.”

With a cancer as difficult as DIPG, radical new approaches are necessary to develop potential new treatment options for patients and their families.

“When faced with a disease like DIPG that has a 0% survival rate, I believe that we’re forced to devise radically different approaches in order to find effective treatments. I think the strategy behind the Tumor Cell Hotel is incredibly promising and I’m eager to develop this concept into a therapy for DIPG,” – Dr. Alexandria Harrold

Dr. Harrold will spearhead cc-TDI’s effort through a new, out of the box biomaterials concept called the “Tumor Cell Hotel” where DIPG cells will check in but never check out. The Tumor Cell Hotel concept aims to lure DIPG cells away from healthy cells and eradicate them. “When faced with a disease like DIPG that has a 0% survival rate, I believe that we’re forced to devise radically different approaches in order to find effective treatments. I think the strategy behind the Tumor Cell Hotel is incredibly promising and I’m eager to develop this concept into a therapy for DIPG,” explained Dr. Harrold.

“Mina quoted Benjamin Franklin that change will happen when those unaffected are as moved as those who are. Bean’s parents and brother, Marky, are bringing DIPG to this level of awareness, in large part because of the incredible community that supports them and Storm the Heavens”, says cc-TDI scientific director Dr. Charles Keller.  He continued, “We can’t thank Raymond Rodriguez-Torres [Bella’s dad and co-founder of Live Like Bella Foundation] enough for bringing Bean’s Family and cc-TDI together.”

Storm the Heavens and cc-TDI are natural partners in the fight against childhood cancers – each organization has dedicated their efforts to making all cancers survivable, regardless of the initial diagnosis.

DIPG is a brutal form of cancer that is desperate for new advancements in treatment options. The natural synergy between cc-TDI and Storm the Heavens is the start of a new wave of DIPG innovation.

To learn more about cc-TDI’s efforts to make all cancers universally survivable, visit cc-TDI.org.  Follow this project’s weekly progress at the Open Science Forum here.
All photos used in this press release are courtesy of Tyler Miller Photography.

About Storm the Heavens

Storm the Heavens was established to honor the legacy of Philomena “Bean” Stendardo, who was diagnosed with Diffuse Intrinsic Pontine Glioma at the age of 7. After fighting DIPG for 10 months, she was called home to our Lord. She leaves behind a legacy of faith that touched the lives of everyone that met her. In her wake, Storm the Heavens aims to bring advancements in DIPG research to the forefront.

The Children’s Cancer Therapy Development Institute is a unique non-profit organization focused on the ‘preclinical gap’ in childhood cancer research. Our mission is to bridge scientific discovery and the initiation of clinical trials. Through our efforts, we will provide evidence-based testing for the selection of new drugs to be used in childhood cancer clinical trials, thus seeding pediatric Phase I and II trials. This concept was emphasized in the Institute of Medicine Report, Making Better Drugs for Children with Cancer in 2005.

Our longstanding work with mouse models of brain tumors and sarcomas is the cornerstone for basic science & target discovery, as well as preclinical studies, for our mission. The cc-TDI research team is led by Scientific Director Dr. Charles Keller who follows in the footsteps of his mentor, 2007 Nobel laureate Mario Capecchi. The cc-TDI laboratory is based on the premise of a non-profit multidisciplinary biotech and is thus located in between the Silicon Forest in Beaverton, Oregon (Intel Headquarters) and the Portland-area medical center. Our industrial modern 4600 ft2 BSL wet lab facility is a former 70-year old paint factory remodeled by Nike as an off-site creative space – an ideal setting to spark innovation.